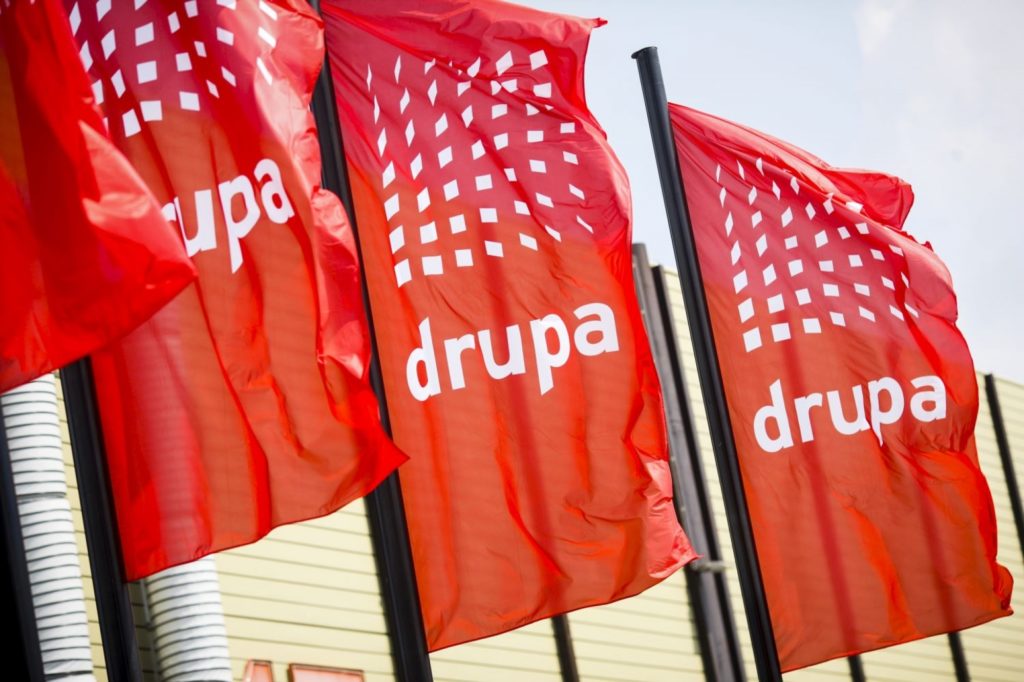 And so the countdown begins. A year from now, the doors will open on drupa 2020. For me, this will be the seventh drupa in my 25-year career with AD Communications! As specialists in print and packaging, the show is a four-yearly landmark in our lives and a measure of the dynamic progress of our sector.

Past drupas are memorable milestones for all of us. We recall the products we launched, the colleagues and client personalities we worked with, the editors and analysts we met from all over the world… and the beers we drank. (Well, we might have a problem recalling those.)

From today’s vantage point, it’s almost impossible to believe that, at my first drupa in 1995, the concept of digital print was still breaking ground following the bold market entrance of Indigo and Xeikon at Ipex ‘93 a couple of years earlier. Digital prepress, computer-to-plate and offset press automation were the other dominant talking points, and we were helping clients like Komori, Crosfield, ECRM, Horsell Anitec, Purup Eskofot and Polaroid to grab the headlines.

By drupa 2000, the internet was beginning to make its mark on the print community and on our client base. New dotcom players offered solutions for streamlining processes and supply chains, while technologies like digital file transfer were challenging ways of working that seem archaic now. They may not all have endured, but disruptive brands like Vio, PrintMountain, TripleArc, Noosh and Paperexchange pointed the way to the future significance of e-commerce in print.

That was also the year we launched our AD Communications pre-drupa Media Conference. 20 years on, the event continues to bring together the market’s leading technology brands with editors and influencers to share news, views and trends.

In 2004, drupa brought me back from maternity leave with a bump. Increased sophistication of digital workflows and the promise of smoother process integration had the industry clamouring for more standardisation, leading to this being dubbed ‘the JDF drupa’. It’s funny that, 16 years on (that six-month old baby is now a teenager), end-to-end integration and automation are still critical talking points for so many vendors and their customers.

drupa 2008 sticks in my memory as the ‘last hurrah’ before the global financial crisis hit (and for the sweltering temperatures endured as we worked the show for names including Domino, Kodak and EFI.) Close to 400,000 visitors flocked to Düsseldorf that year, but the ensuing worldwide recession fundamentally reshaped the print industry and put the brakes on many ambitious investment programmes.

Four years on, in 2012, a consolidated market cautiously welcomed the first green shoots of economic recovery. Digital production capability had proved to be one of the leading survival factors for the PSPs who had come through the crisis, reflected in an increasingly digital client portfolio for us. Meanwhile, inkjet technology was now starting to fulfil its promise as a valid production technology for a broader variety of commercial applications, and world-weary printers sought inspiration from Landa’s ‘nanography’, lapping up the visionary showmanship of the ‘father of digital print’.

Come drupa 2016, a positive energy seemed to return to the halls, and a healthier appetite for investment. The simplistic ‘digital vs analogue’ debate was history. Blended production had become reality for most print businesses. The focus had moved beyond technology for its own sake, to the potential for PSPs to capitalise on their capabilities, broaden their portfolios into new applications and unleash new commercial potential.

The organiser’s own narrative led with future themes such as 3D, functional and packaging printing, while our own assessment of the trends shone the light on digital, packaging, multi-channel and diversification as the watchwords of drupa 2016.

Blogging from the show, a colleague remarked on the spirit of innovation and how the print industry risks being hamstrung by its definition. He wrote: “Print in all its guises is… a highly creative, engaging and dynamic medium, a critical part of the modern communications and manufacturing mixes and more incredibly diverse than ever in its history.”

So here we are, two whole decades on from drupa 2000. Who knows yet what the defining products will be in 2020, which launches will dominate the headlines, and which exhibitor stories will capture visitors’ imaginations?

The new event strapline reminds me that even a ‘youngster’ like me may reminisce about the seismic changes in print over the last two-and-a-half decades, but our industry keeps moving forward. With 2020 on the near horizon, we should celebrate the unique qualities and versatility of print, follow the positive path of continuous innovation and – above all – embrace the future.

Think you could benefit from our specialist communications expertise and experience of drupa marketing campaigns? Get in touch at sshurmer@adcomms.co.uk to receive our guide to Maximising Your Exhibition ROI.