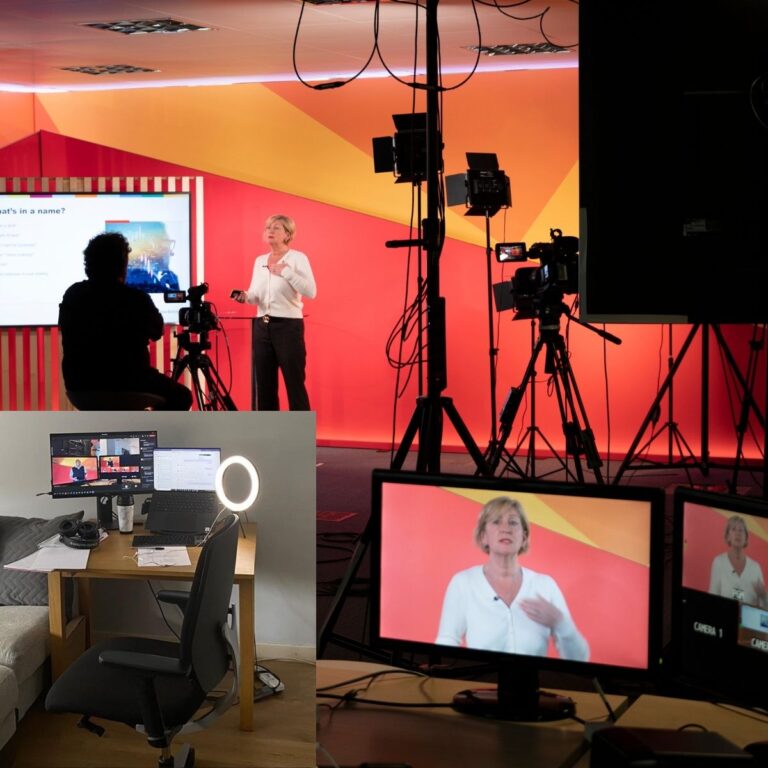 Imagine being 24 hours away from directing a week-long video shoot and being ‘pinged’ by the NHS app to say you’ve come into contact with someone who has tested positive for COVID-19.

This nightmare scenario became reality for me a few months ago. Isolation loomed, but the show had to go on. The talent was all scheduled in, the crew were setting up in the studio, the shot list was in place, the autocue scripts were ready to load.

The reality was, we had 24 hours to make this work, so we needed to re-think our approach, fast.

Happily, being a control freak means I’m big on preparation, which makes putting Plan B into action so much more straight forward. And if COVID times have taught us anything, it’s that there should always be a Plan B.

So, how did we overcome the challenge? How did we get 30+ videos shot and simultaneously edited without a director physically on-site? The simple answer is that we relied on our team and on the meticulous prep work we had done in advance of the shoot.

With a background in TV, I know that – for a complex shoot like this – you must know exactly who you need, in what place, and when. You need to define how you want to frame each shot, which angles are needed for the final edit and how much time you have to get the footage ‘in the can’ before you have to move on and shoot the next segment.

We spent those 24 hours making arrangements to get the ‘eyes and ears’ we needed in the studio (including finding a way to get me on-site, albeit virtually). We produced a ‘director’s bible’ for each day of the shoot, containing the running schedule, the edit plan, the autocue scripts, the individual shot plans and the camera set-ups. We included notes for the whole crew on the rationale for each individual video, details of the people being filmed, and guidance on style/tone, so that everyone in the studio was involved in making the content a success.

When the first shoot day rolled around, everyone was in the right place, had the information they needed and knew their role.

From the safety of my home office, I joined the shoot via an iPad placed in front of the monitors, and plugged into the studio audio. The lead editor also dialed-in so he could check technical details ready to receive the files each evening, and I reviewed sample edits in real time so adjustments could be made live on-set as needed.

No question that it was more challenging to get things exactly the way I envisaged them but, thanks to the teamwork of all on-site, the 5-day shoot went without a hitch and the client loved the content.

No question either that I missed being on site, the ‘buzz’ of being on a live set, talking to interviewees and presenters before ‘action’ to get them relaxed on camera. Giving sensitive feedback between takes and making sure subjects will be happy when they watch themselves back are priorities for me when producing corporate video content. Afterall, great lighting, sound and scripts can’t hide someone who is uncomfortable on camera. Thankfully, a colleague stepped in and played this part to perfection.

I learned that week that there’s a big plus to being a control freak, as well as the immeasurable value of good communication and great teamwork.

You can’t beat being there in person, but Plan B is always a good plan to have.